Tax included.
Quantity must be 1 or more

Choose the (skins) color for your Single Board purchase.

Each single game unit comes with a skins set in the one color you select. Though you can buy an additional skins set and have a different color on either side of the game.
(Skins are not sold individually).

NOTE:  VAT /GST was not collected in Kickstarter and avoided KS, Stripe and BackerKit fees being charged on tax.

TorKings Magic Self Sorting System in action (above).  We were totally over having to manually sort through the tokens after every game - and we know everyone else is too. So we completely re-engineered the hardware to sort and return the tokens back to you in a flash!

That's thankfully ended 5 decades of a tedious game wasting task. Now you  get a load more game time - and because sorting is so satisfying and fun its a real treat that everyone looks forward to at the end of a game. If you're experiencing the buzz of TorKings' Token Return System you know you've left the past where it belongs and arrived in a future of fun that's long overdue.

A grand new board is here. It's quick and easy to big-up the game fun. 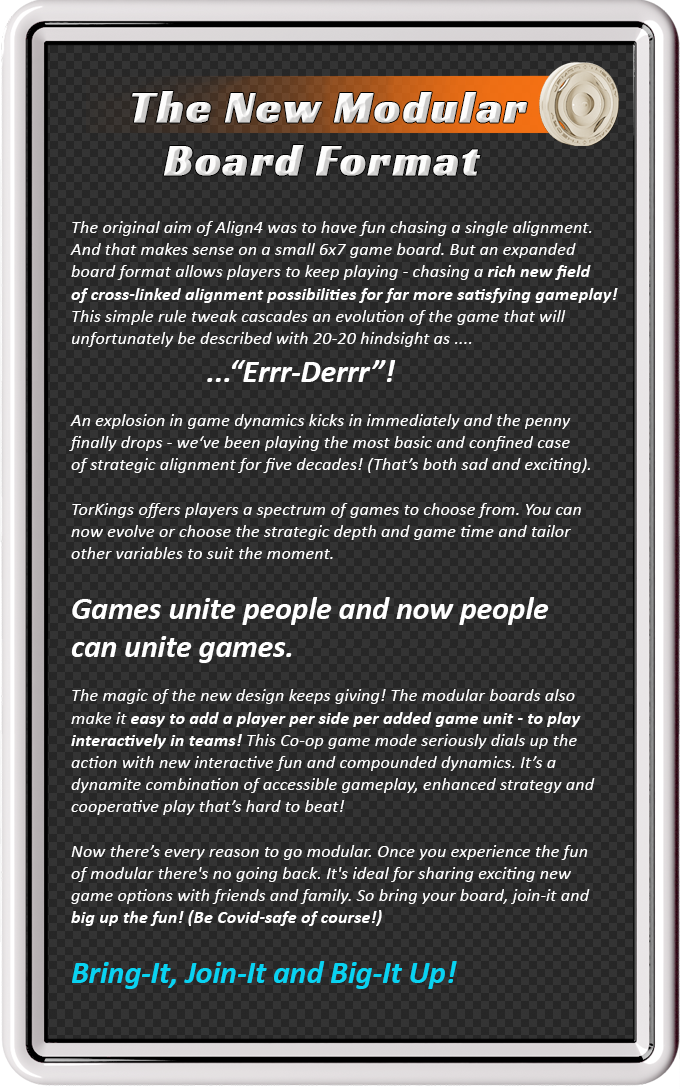 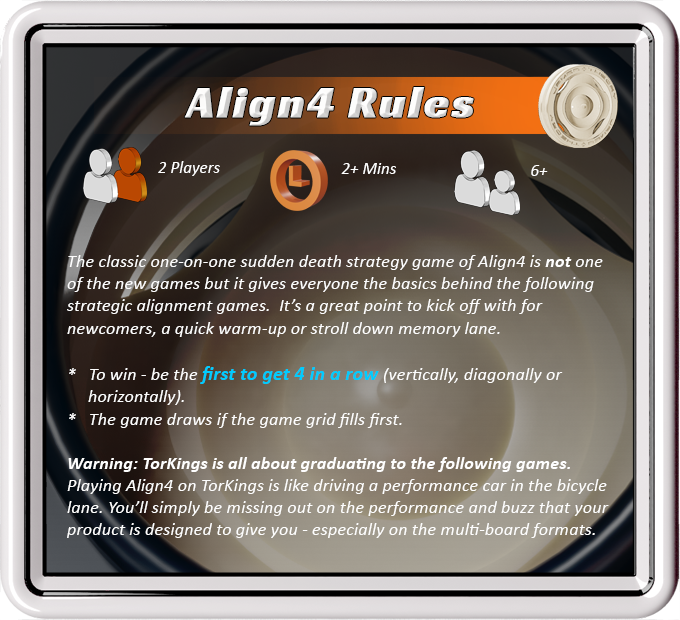 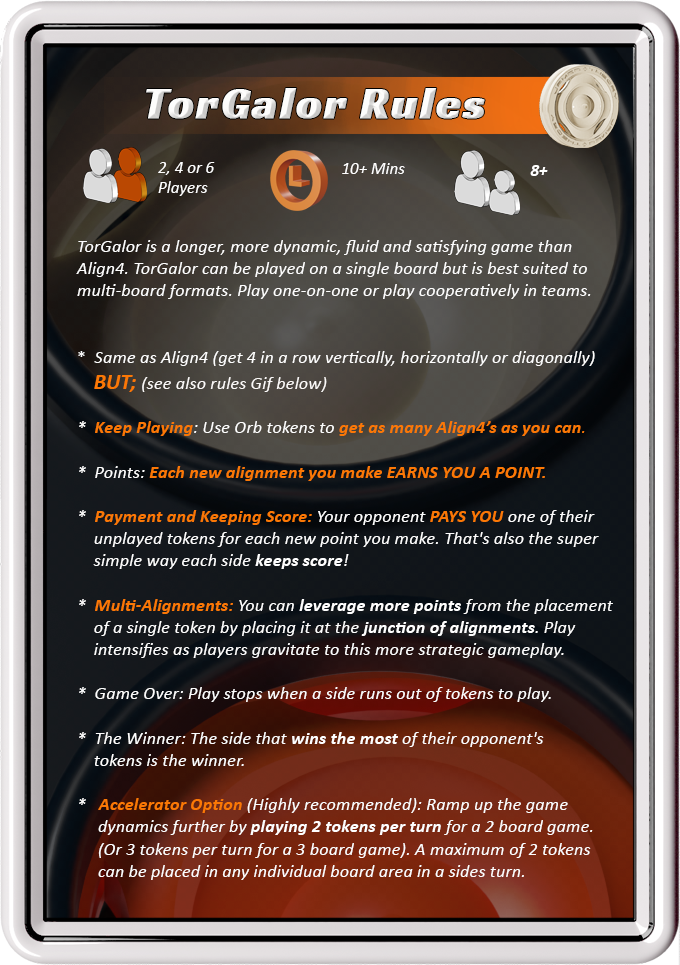 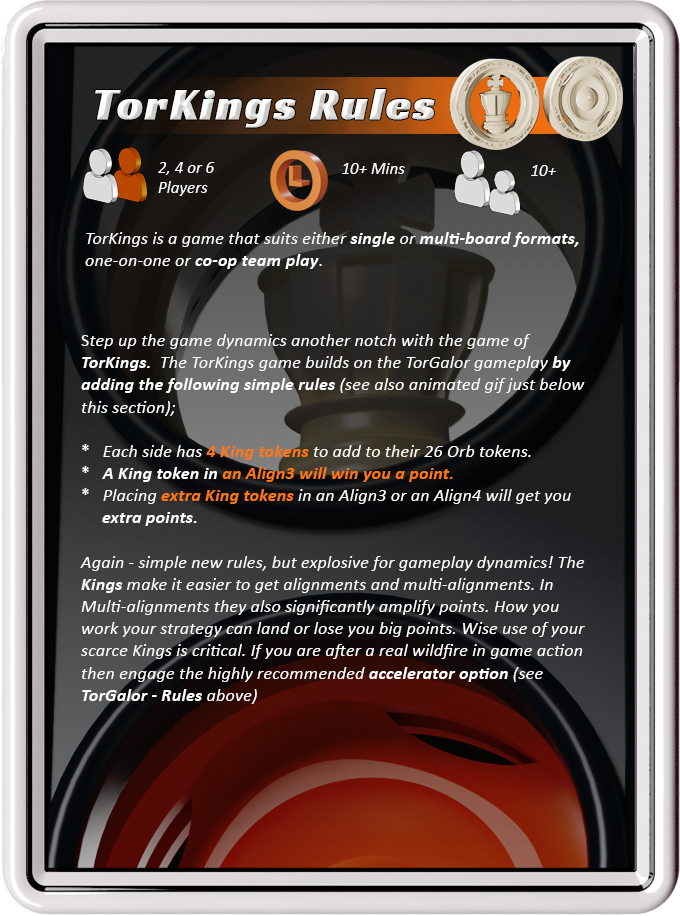 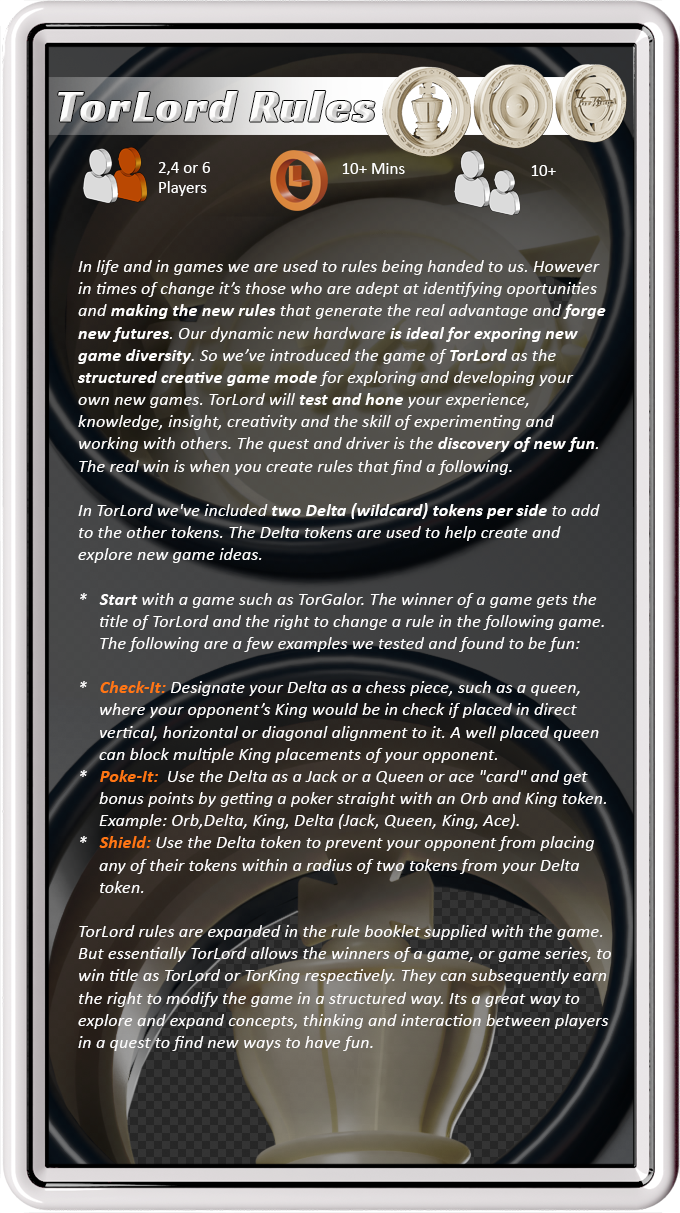 The right kind of cooperative play can make growing skills, meaning, friends and minds - a load of fun!

TorKings flexible new hardware and gameplay opens a diverse range of new game options so players can play one-on-one competitive games or cooperative team games with up to 6 people.

Up to four players can play interactive cooperative team team game of TorKings on a single game unit. Though the fun is really is harnessed on the double or triple boards with up to 6 people. Each player in a team gets to place a token in their teams turn so that everyone is in on the action and the game dynamics really escalate.

You have probably heard about the many benefits of cooperative games including improved communications, social IQ, team bonding and building, stress reduction and gaining more meaning in life. You may have even reading up which games to buy or even bought a few co-op games to try - but then been pushed back by detailed rules and maybe thrown in the towel when you have tried to teach others so you can play with them.

Studies have repeatedly shown that one of the highest drivers of meaning in life for humans is the constructive interaction they have with others. Board games can bring people together to interact so boxes get ticked right away.  But not all games are equal.  Many games are competitive so there is a winner and a looser - which can be a bitter experience that many seek to avoid.

There are a number of cooperative game types and one of the defining features is that a loss is distributed among team members - which makes the gaming experience more enjoyable as it is much less onerous on individuals.  Most co-op games pit you against a game mechanic (detailed rules) so that you all team up to play against the game system. TorKings is one of a rarer cooperative board games where you play one team against another. Losses are still distributed but as TorKings' rules are exceedingly simple and quick to pick it has a rare distinction of being one of the most accessible cooperative strategic board games on the planet!

You have probably heard about the many benefits of cooperative games includes improved communications, social IQ, team bonding and building, stress reduction and gaining more meaning in life. You may have even reading up which games to buy or even bought a few co-op games to try - but then found out that they take an extensive amount of time to read and understand the detailed rules and then possibly thrown in the towel when you have tried to teach others so you can play with them.

There are many cooperative board games out there but they by and large have failed to make it into the mainstream.   The main problem being that they are often notoriously laden with detailed and complex rules that take ages to pick up and mobilize into actual gameplay. I.e. they suffer from poor accessibility. You can join TorKings modular boards and play new interactive cooperative team games with up to 6 players. The TorKings has a spectrum of games to suit kids 6+ to adults 100+. The modular format makes it ideal to simply add boards and people to enjoy the interactive fun of cooperative play.

In co-op team-play one side plays the other and then all the rewarding dynamic interactions you get from communicating, negotiating and planning strategically together as a team come into play.

Whether you are 6 or 60+ strategic team play is a meaningful and rewarding  way to bring people together while you all sharpen and build your social IQ and communication skills.  With TorKings range of games there are game options to suit 2 to 6 players - ideal for family and friends. For board games generally, the commercial push is towards low cost, low margin, high volume distribution.  The products that result are typically flimsy, poorly designed and low quality - that results in users invariably getting a sub-par experience.
James and Theory on the other hand is driven to elevate the game experience into something special. Our products are designed with a premium game journey in mind. With breakthrough design features, a keen eye for aesthetics and the use of premium quality materials - our products look fantastic, are a tactile treat and have functionality and performance that is second to none.  In fact the most common phrase we here from users is “It’s magic!”

If you like having the very best, TorKings is designed to deliver. 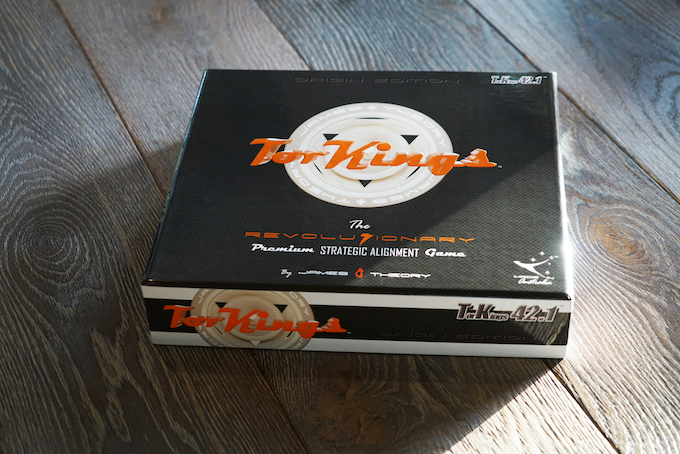 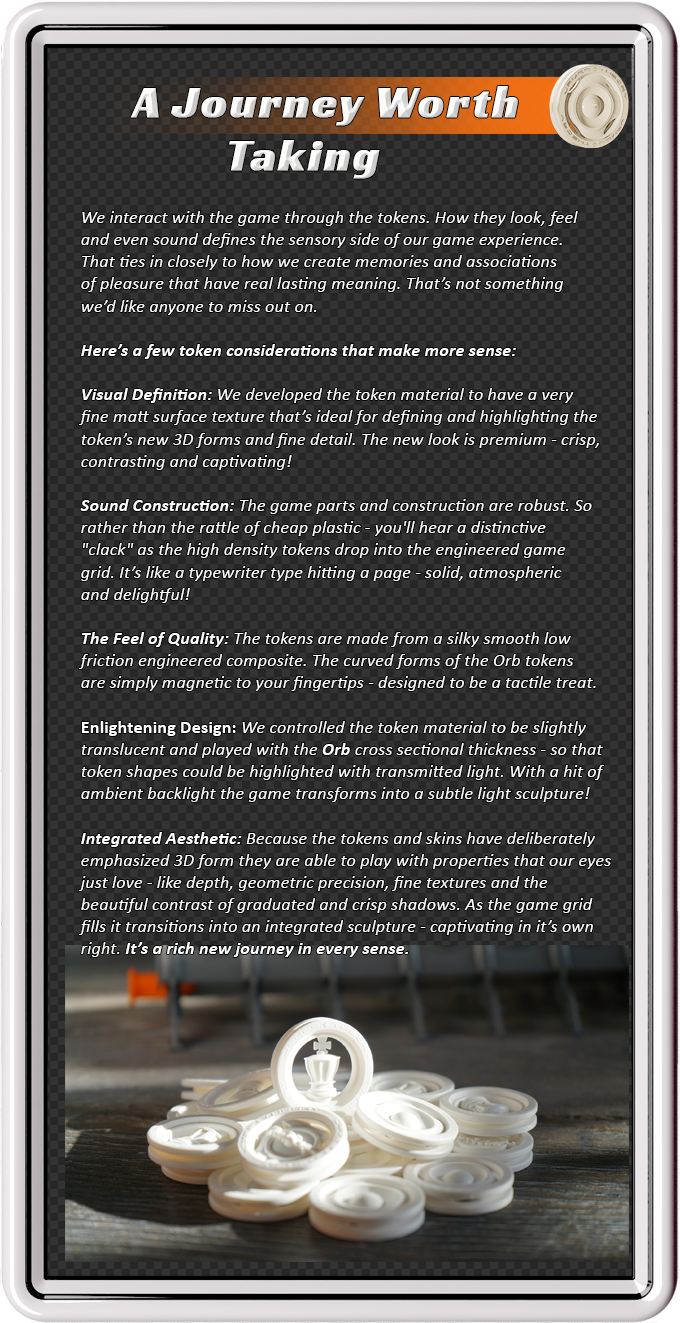 TorKings tokens have been redesigned to sort themselves and return back to you  - but that’s just the tip of a large redesign iceberg! Check out below how we have revolutionized the design of disk tokens to open up the gameplay diversity and dynamics while introducing iconic sculpted disk tokens to the world of board games. 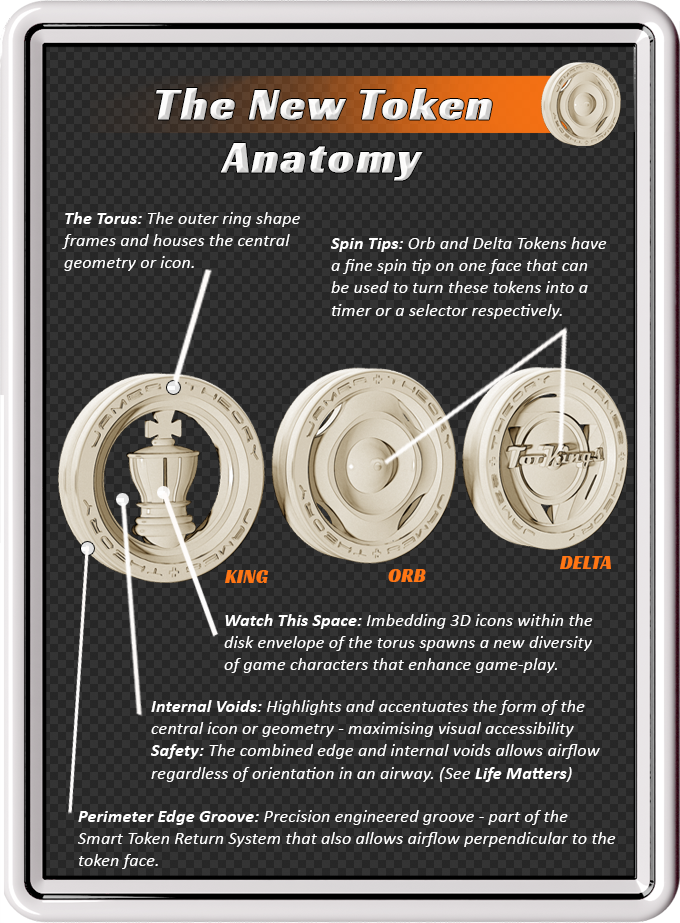 A true breakthrough in design, function and performance - TorKings tokens are crisp inspiring forms that elevate your game experience in so many ways. To enlarge view - right click on image and select the "Open image in new tab" option then go to new browser tab that is created.